This week’s cake brought back memories of childhood games with boys and Star Wars figures. I had a limited collection of my own, but my brothers and the other boys in the village had amassed a considerable army between them. My personal favourite was one that had a fish head on something resembling a human body, but I have no idea what he was called, or even if I’m remembering that entirely accurately. I also appreciated the shiny gold of C3PO but beyond that I wasn’t altogether bothered. I’m no Star Wars geek so had to do a bit of internet research for this cake and printed off a few pictures to work from. 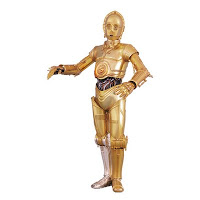 I decided that I could manage to recreate R2D2 and Yoda with sugarpaste and was confident that the two five year old boys I was making the cake for would be able to recognise them. Having not seen any of the Star Wars films from recent years, i.e. being stuck in the eighties, I wasn’t sure which of the old charcaters would be known to the new breed of Star Wars fans. I surmised that R2D2 and Yoda would surely have survived any cull and set to work.

The birthday boys had requested buttercream rather than sugarpaste to cover the cake, which accounts for the less than smooth surface. I am yet to perfect a technique that produces a perfectly smooth finish like a freshly plastered wall, but I’m sure it tasted better than sugarpaste anyway. 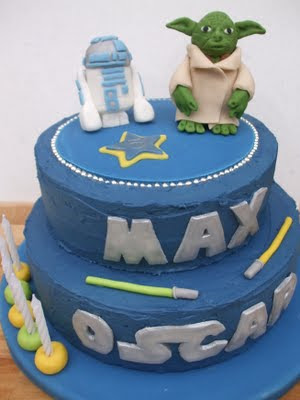 If I do this one again I might attempt an Ewok. Maybe.
﻿