This month’s Random Recipes Challenge from the lovely Dom at Belleau Kitchen  takes me away from my baking comfort zone and into the unfamiliar world of Thai cuisine. Those of us who contributed to the September challenge were paired up and asked to provide each other with a random recipe. We each had to count our recipe books and ask our partners to randomly pick a book by number, and a page from the book to identify the recipe.

I was paired with Phil from As Strong as Soup, whose blog was new to me, but I am now a keen follower. I counted a total of 46 cook books on my shelves and duly reported back to Phil, with my fingers crossed for a lovely cake recipe.

Phil clearly has quite an imagination as his method for selecting my recipe was most unusual. He divided the serial number of his new lawnmower by its price and then by the frequency of the radio station he was listening to and came up with the number 11. Number 11 was not a baking book, but ‘Complete Thai Cooking’ by Carol Bowen, Cara Hobday and Sue Ashworth. We picked this book up years ago in a cheap bookshop in Plymouth. Whilst I am not particularly familiar with it, my husband does produce some mean curried noodles using this book, so I still had hope for something good. As I am a vegetarian I was hoping for something that I could eat as I am not in the habit of cooking fancy meat dishes for my husband. I can roast a chicken but it doesn’t get much more exciting than that.

Phil came up with a very elaborate means of identifying a page number, using the track listings from various albums he had been listening to that day. I followed Phil’s instructions and turned to page 79 with much anticipation, only to find a recipe for Filled Cucumber Cups. At least it was vegetarian.

This recipe involved carving pretty shapes from chunks of cucmber and filling them with a tasty mix of peanuts, lime juice, shallots, chilli and not much else. It also recommended filling cherry tomatoes with the same peanut mix. I thought it sounded a bit dull so I made a few sweetcorn fritters from another page in the book to accompany the cucumber cups, and ended up with a very tasty little plate of Thai starters. 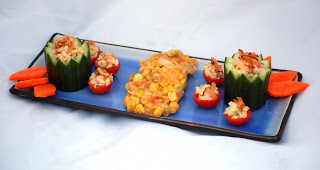 This is a recipe I would never have chosen, which I guess is the point of the Random Recipes challenge. So thank you Dom and Phil, as I thoroughly enjoyed my Thai Cucumber Cups!