So I never did get round to making those hot cross buns. I did have a go at Chelsea buns this weekend though. I used a recipe I found on the Good to Know website. These were absolutely delicious fresh out of the oven, and were still good later that day. They had gone stale by the next morning, but there was only one left by then! The honey glaze on these adds some extra flavour and makes them super sticky too. I also added a bit of cinnamon before scattering the fruit inside. 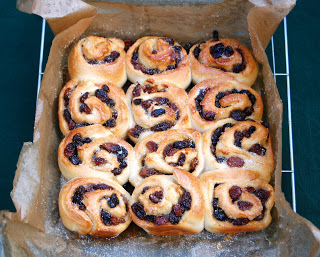 I don’t know if Chelsea buns are ever good the next day, but I will try another recipe too, in the name of research. Not surprisingly, my son wants me to swap the fruit for chocolate and nuts next time. Sounds good to me!