There seem to be a lot of cocktail inspired cupcakes around for National Cupcake Week, but I think they’re great fun so I’m not going to let that stop me. The more the merrier! These were made for a 40th birthday cocktail party and were served alongside little boozy jellies. 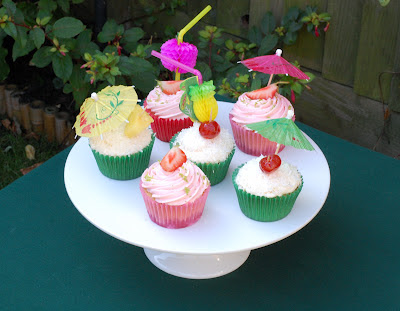 For the strawberry daiquiri cakes I used the recipe from the Hummingbird Bakery’s ‘Cake Days’ book to make a rum and sugar syrup in which to soak the strawberries. I then put a layer of these in the bottom of each cupcake case and filled the case with my usual victoria sponge cupcake recipe, with a good helping of lime zest stirred through. I added the remaining rum and strawberry syrup mix to some vanilla buttercream, with a little more rum and some pink food colouring. This was piped on top of the cakes, which were then decorated with more lime zest and a quarter of a strawberry.
The flavour was great and the cakes look very pretty, but they do need to be eaten with a fork as the syrupy strawberries can get a bit messy.

I used a recipe I saw on a lovely blog called Under the Blue Gum Tree to make my pina colada cupcakes. A quarter of the quantities stated made 10 large cupcakes, and the sponge was delicious. I used a different recipe for the frosting as I didn’t have any yoghurt. Instead I made vanilla buttercream and added the remaining pineapple and rum syrup. I also added some tiny pieces of pineapple which added to the flavour but did begin to curdle the mixture a little. I sprinkled dessicated coconut on top and decorated with cherries and pineapple on sticks.
I have now developed a taste for boozy cupcakes, and I’m planning my next experiment. I have to remember not to let the kids lick the bowl too often though!
I’m sending these over to Dolly Bakes and Laura Loves Cakes for their monthly blog event, Calendar Cakes, which this month is celebrating National Cupcake Week. I’m sure there will be lots of ‘caketails’ on show, so do join the party and take a peek at their blogs for a round up at the end of September. 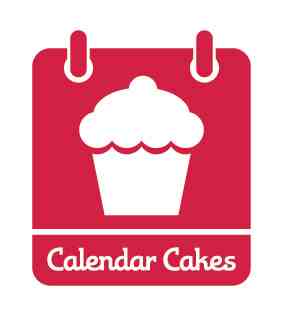